By combining some of the essential attributes needed to perform at the highest level as an MMA Fighter, we’ve put together the skills and know how of some of the best in the world to create our own ‘Perfect MMA Fighter’! 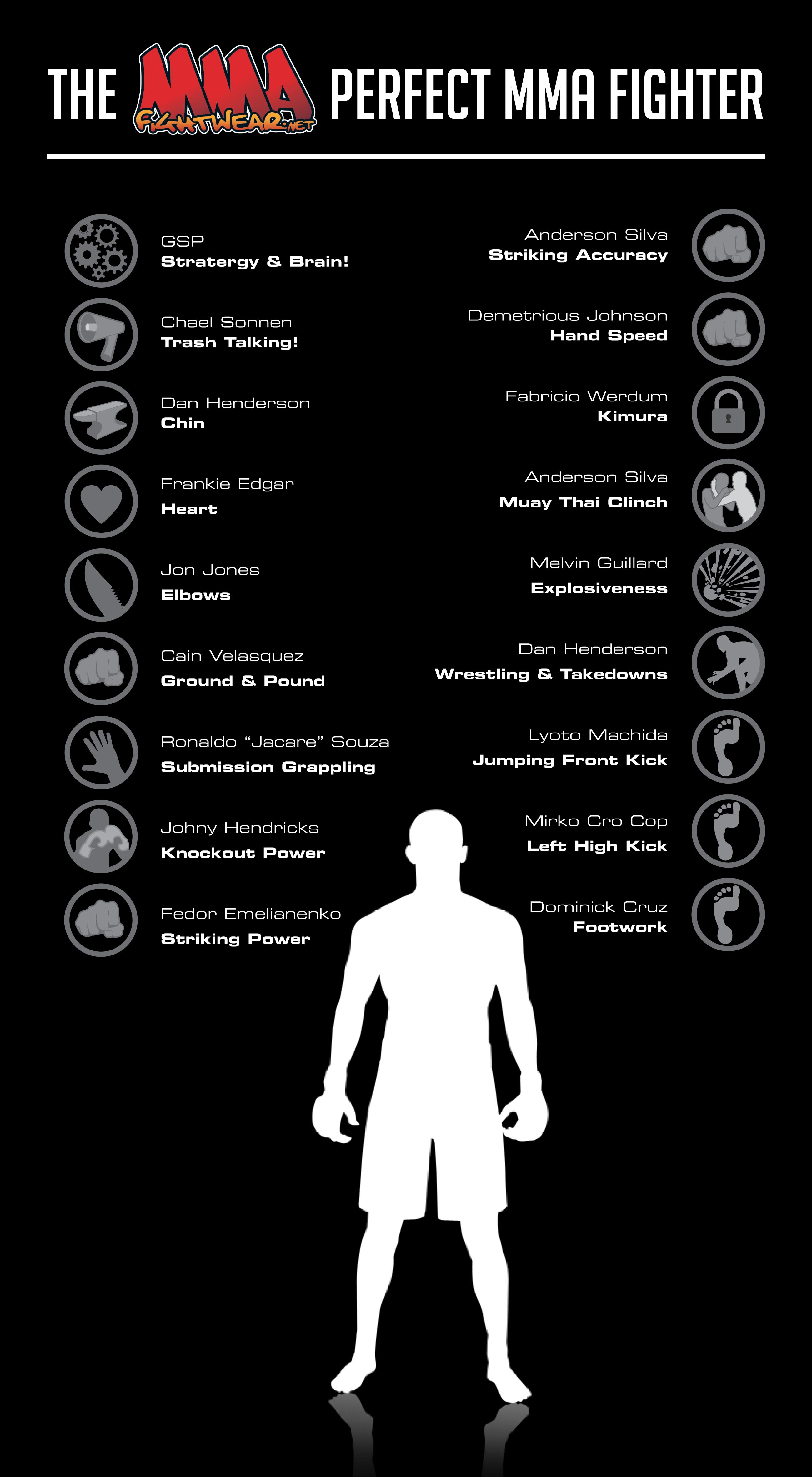 Not only is our fighter a Mixed Martial Arts specialist, he’s also made up of a fair few nationalities. Taking in to account the nationalities of the fighters we’re drawing his skills from, he isAi??56.25% American, 25% BrazilianAi??andAi??6.25% Russian, CroatianAi??andAi??CanadianAi??to boot!

Starting off, we’ve blessed our guy with theAi??Strategy and BrainAi??ofAi??Georges St. PierreAi??due to his flawless ability to calmly adapt and change his game mid fight, not to mention is unrivalled desire to win mentality.Ai??

There’s nothing like a bit ofAi??Trash TalkingAi??to build up a fight and get beneath your opponents skin before you’ve even gone toe to toe. There were a few candidates for this, but there are few others who like the sound of their own voice than the opinion dividingAi??Chael Sonnen.

The best form of defence in any combat sport is to avoid being hit, but in the unlikely event that our superhuman will take a few hits, then a cast ironAi??ChinAi??will also come in pretty handy.Ai??Dan HendersonAi??boasts never being knocked to date after sixteen years, need we say more?

When the heat of the battle rises and things get tough, the desire to keep on going and fight until you’re running on empty requires courage and a bigAi??Heart, something thatAi??Frankie “The Answer” EdgarAi??is famous for.

There are so many attributes that we could have taken fromAi??Jon Jones, but if you askAi??Stephan Bonnar, he’s likely to mention that devastatingly fast spinning ElbowAi??he ate during Jone’s 2nd fight in the UFC. It’s not only the speed you have to look out for, Jones’s elbows are like blades and seem to open up cuts like a machete!

Cain Velasquez’sAi??domination of AntonioAi??“Big Foot” Silva backAi??at UFC 160 was a prime example of Velasquez’s brutally effectiveAi??Ground and PoundAi??game. When used effectively, raining down a flurry of blows using this technique can often be a fight finisher.

For overallAi??Submission GrapplingAi??prowess, there are few MMA fighters more highly thought of than the Ronaldo “Jacare” Souza. Jacare is one of the most feared fighters in MMA when the fight goes to the ground and often tops the list of the best BJJ practitioners within the sport too.

As with all of the different traits and attributes we’ve listed, there are going to be many choices for each, but our decision to includeAi??Johny HendricksAi??forAi??Knockout Power is based on this guy’s ridiculous striking power and the fact the he seems to get more powerful with each fight.

As well as knockout merchant credentials, we though that we would give our fighter some additional Striking Power from Fedor Emelianenko.Ai??Renowned as one of the all time greats, “The Last Emperor” possessed bear like strength with unmatched power behind his heavy hands. It has been said that Fedor actually punched too hard, and posed a risk to the health of his own hand bones and joints!

UFC stat boffins will know of the incredibleAi??Striking AccuracyAi??possessed by one of, if the not, the greatest fighter in MMA history. There’s so much that we could take from Anderson Silva when creating our Perfect MMA Fighter, but his striking accuracy keeps him firmly at the top of the FightMetric ‘Significant Strike Accuracy’ stats list with an impressive 62.7% record.

Few can match the Hand Speed ofAi??Demetrious Johnson, one of those who was recently frustrated and outfoxed by “Mighty Mouse” wasAi??Ali Bagautinov at UFC 174. In this fight it was Johnson’s overall speed and manoeuvrability that helped him to overwhelm BagautinovAi??secure the victory.

We might be being a bit excessive here as we’ve already got the submission grappling skills of Jacare in the bag. But, as one of our favourite BJJ maestro’s, we thought we’d throw in a dose of Kimura specialist, Fabricio Werdum for good measure too.

If there’s one place that you do not want to find yourself in the midst of a fight, it’s being held in the Clinch of Anderson Silva. It’s no secret that Silva can come at you and do you damage in many ways, but feeling the full force of repetitive knee and elbow strikes from this position is certainly one of the most devastating.

Melvin GuillardAi??is a genuine athlete that possessAi??ExplosivenessAi??of movement as well as punching power. Guillard’s aggressive, dynamic style made him exciting to watch, despite being released earlier this year by the UFC after nine years with the organisation.Ai??

Not only renowned for his Iron Chin,Ai??Dan Henderson is also highly regarded for hisAi??Wrestling & TakedownAi??skills. These attributes are sure to give our fighter another option to effortlessly control the fight if it goes to the ground, or purposefully take the fight to the ground to show off his skills!

Not only do we have a well rounded, probably unbeatable fighter in the making, we also want him to be a crowd pleaser.Ai??Lyoto Machida’s Front Leg Kick that he originally used to flaw Randy Couture back in 2013 certainly got people on their feet and is still talked about today as one of the most famous knockouts in the UFC.

Blink or take your eye off the ball and our fighter will hit you for six withAi??Left High Kick that will take your head off your shoulders. Widely feared as being a generally scary individual not mention one of the greatest MMA heavyweights in MMA history,Ai??Mirko Cro Cop’sAi??LHK was lightning quick equally as powerful.

It’s highly likely that you are going to be hit by our fighter, given the lethal cocktail of skills we’ve plied him with. It’s also very possible that you are unlikely to get near him as well, as we finish him off with the unique and incredibly quick FootworkAi??ofAi??Dominick Cruz.